…We left our hero coming to the aid of a damsel in distress. The evil double-glazing empire had dispatched an army of horny, if slightly retarded, window fitters to steal her virtue, but had been cunningly repelled by the use of reverse psychology (essentially pretending to be gay). A great victory had been won, but not without cost. One of the windows had fallen at the hands on some conniving chipboard and now lay vulnerable to attack. The testosterone-filled rascals had vowed to return and finish what they’d started. Our saga continues….
The phone was ringing. The sun glistened across my muscular arm as I answered masterfully. ‘Hello?’
‘Hello Mr. Cororan?’
A lesser man would have used many words at this point, but brevity was the key. ‘Speaking.’
Reeling from my duo-syllabic response (etc) my adversary replied: ‘This is Alex from [INSERT COMPANY NAME HERE]. We’re standing outside your house with a window.’
‘OK…Is this the beginning of a joke?’
‘I’m sorry?’
‘There’s no need to be.’
‘Where are you?’
‘I’m at work.’
‘But we’re here with a window.’
‘…Nobody told me you were coming.’
‘Is there any way you could get back?’
‘Not any time soon I’m afraid. I can do Wednesday.’
‘We’re fully booked for the rest of the week. Could anyone else let us in?’
On reflection it was probably the wrong thing to say, but I couldn’t help myself. ‘There’s a flimsy piece of plywood boarding up the bathroom. You could climb up on the roof and punch your way in?’
There was a moment’s silence where the man seemed to be weighing up whether or not to use colourful language. Finally he erred on the side of caution. ‘…OK sir. I’ll get back to you.’
‘OK, speak soon.’
I rang off, putting the whole thing down to simple miscommunication, but ohhhh noooo, larger calamities were afoot. An hour or so later the phone was ringing once more.
‘Alex here…again…when will you be…home from…work?’
‘Why?’
‘…We appear to be locked in your house.’
‘How on earth did you get in?’
‘We did what you suggested and climbed onto the roof.’
‘You’re joking?’
‘Weren’t you being serious…oh…I can see now that you weren’t!’
‘Explain to me what has happened.’
‘Well, we fitted the window, but then realised that all the doors and frames on the ground floor need a key.’
‘So what you’re saying is that you are calling to inform me that you have broken into my house?’
‘…erm…well…no, you suggested it.’
‘AS A JOKE! OK, can you wait there while I phone the police, or are you planning to break back out again?’
‘…’
‘Is Jason there?’ (see previous post)
‘Yes.’
‘Can you put him on the phone?’
There was a brief muffled conversation. ‘He doesn’t want to come to the phone.’
‘I bet he doesn’t!’
‘Do you mind if we climb out of a bedroom window and leave it open till you get home?’
I began to consider the possibility that I was dealing with one of mankind’s more primitive ancestors. An idea for testing this hypothesis occurred to me.
‘Don’t do that. You might set off the Halon system.’
‘The what?’
‘In the event of a fire halon gas drops from the ceiling. This sucks all the oxygen out of the room and extinguishes the flames.’
‘I can’t tell if you’re being serious or not.’
‘Deadly serious. There’s one in the kitchen and one on the stairs…they look like smoke alarms…Look, just stay relatively still and get your boss to phone me.’
I rang off. Moments later their boss was on the line. ‘I take it you’re joking about the halon system.’
‘Of course.’
‘What a couple of clowns. Is there any way they can get out?’
‘Yes, there’s a spare key in [INSERT MEANS OF BURGLARISING ME HERE]’
‘Thanks.’
‘I hope this won’t affect their employment.’
‘I was thinking of having them both killed. Does that qualify?’
‘How would I notice any difference?’
‘Quite. Sorry about this Mr. Cororan. Rest assured they’ll both be flogged.’
‘I would expect nothing less. Oh and one more thing…last time your guys came over Jason left me a rather saucy note. Could you let him know that, whilst flattered, I’m not interested?’

I’d used the company before and had no qualms leaving two likely lads to install some double-glazing while I headed off to work. By midday the phone was flashing with my housemate’s name.
‘Hi Martin, just popped home for lunch and one of the fitters wants a word.’
‘OK, stick him on.’
‘Hello…yes…Mr. Cororan…this is Jason. We appear to have cocked up the measurements. One of your windows is 200 ml too short, but we’d already taken out and destroyed the old window before we realised. We’ve put a piece of plywood there instead. Hopes that’s OK.’

‘Um…no, obviously not.’
‘Oh…well, you could ring my boss and ask him to order another window?’
‘OK…or…you could ring him!’
‘OK.’
‘OK.’
‘…’
‘…Bye then.’
Later that evening I returned home to survey the damage.
Shortly afterwards my housemate arrived and discovered the following note (number obscured to prevent trolling): 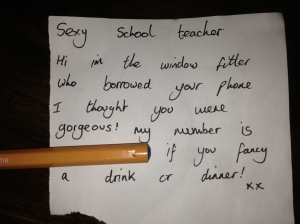 Whilst my housemate is a very attractive woman by all accounts she isn’t that way inclined. So, even if the fitter hadn’t written his note on a piece of toilet paper and had remembered to include his name, he’d still have had no chance.
A more pressing question presented itself – How did he know that we weren’t in a relationship?
This morning I rang the company and gave them what-for middle-class style.
‘I bid you good day. One of your fitters has been cracking onto my wife. The other one can’t use a tape measure. I demand a discount.’
Hilarity ensued.
Later I borrowed the above note and phoned the given mobile number.
‘Hi, is this Jason?’
‘Speaking.’
‘Hi, this is Martin. You installed some tiny windows and plywood for me yesterday. I got your note. Just to let you know – I’m not a teacher, I’m a project manager.’
‘What! Oh, that wasn’t meant for you.’
‘But you left it in my room?’
‘Oh God, there’s been a terrible misunderstanding.’
‘Come now Jason, don’t be coy…’