It’s a little known fact, but it wasn’t the extreme cold that caused vikings to venture south to Angle-land a-raping and a-pillaging, it was the high cost of living.  £19 for two pints! It’s no wonder they started hacking people to death! 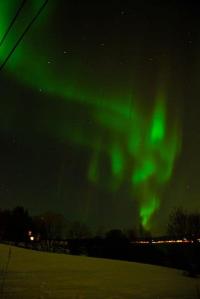 Just got back from visiting the good people of Norway, the highlights of which were:

The best way I can think of to describe the Aurora Borealis is that it’s like watching ‘The Wizard of Oz’ backwards. You start with the innocuous little guy turning some levers, but peeking behind the curtain and seeing the inner workings you realise that it’s actually a humongous supernatural being. The overriding sensation is of witnessing something that wasn’t meant for human eyes.

Of course it’s all well and good getting poetic and zen after the fact. First comes the imbecilic attempt to find this phenomenon. Having rucked up in Tromso, a town 400 kilometres within the arctic circle, and being thoroughly British, we sat astride our steed (hatchback) and drove off into the frozen tundra without any provisions; safe in the knowledge that, if we got into trouble, we could commandeer a local and point at things whilst shouting at them in English.

In an attempt to make conversation with some recently acquired hitch-hikers I carefully selected from an array of ice-breakers, turned to my friend and asked: ‘At what point do we revert to our native language and kill them?’

Passing a graveyard he compounded my gaf by uttering ‘Isn’t that where we buried those French tourists last night?’

We arrived at a secluded fjord; cameras clutched within trigger fingers, and ready to bludgeon each other into paralysis at the slightest provocation. We were in God’s country – silent, serene, magical, unique.

‘How long do you think it would take to get bored of a view like that?’ one of the hitchers asked.

‘I’m bored now,’ the other replied.

One response to “Auroring success…”

This site uses Akismet to reduce spam. Learn how your comment data is processed.